Michelle is a versatile performer playing for a wide variety of occasions ranging from weddings, corporate receptions, formal concerts and recitals.

Michelle performs professionally in the flute and harp duo, Topaz, with recent and current engagements including a performance of the Mozart Flute and Harp Concerto with the Bristol Classical Players and regular appearances for the children’s concert series - Music for Miniatures (Bath, Frome, Street) and Lilliput Concerts (Cheltenham, Bristol).

As an orchestral player, Michelle is often sought as an extra player in addition to her regular commitments as Principal Flautist for both the Brunel Sinfonia and Bristol Classical Players orchestras.

Equally at home playing triple winds, Michelle has also performed in a large number of school and community productions and musicals.

Michelle passionately believes that everyone should be able to access live music, particularly children. 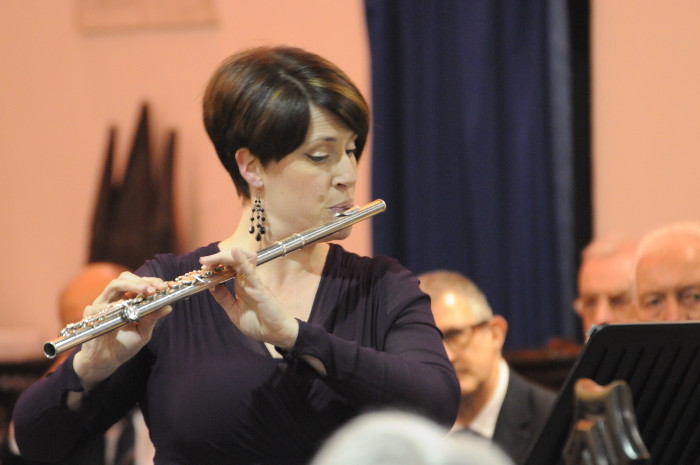 Exquisit! When I closed my eyes you transported me to another world.
Audience Member
Michelle achieves a wonderfully controlled sound from her flute with beautiful vibrato...
Avon and Somerset Constabulary Male Voice Choir
Enchanting storytelling
Audience member
A huge thank you for playing last weekend.

Your alto flute in particular sounded completely gorgeous!
…after a delicate second section it was straight into the finale with a skilful flute solo by Michelle Krawiec standing out from some excellent support by the orchestra.
John Packwood, Bristol Evening Post
Michelle's portrayal of Chloe was simply beautiful. Thank you.
Mark Gateshill
Just a few words to say "thank you", for your superb performance at our concert in Dulverton, last weekend.mYour choice of music was greatly appreciated by the audience, and during this last week, the concert has been the topic of many a conversation, amongst the "locals" in town. On behalf of the Congregational Church, once again, a big "thank you" to you.
Dulverton Congregational Church
The choir was complemented by the beautiful flute playing of Michelle.
Avon and Somerset Constabulary Male Voice Choir
It was amazing and you sounded brilliant!
We were aided by a wonderful flute soloist and her music just floated around the church.
Avon and Somerset Constabulary Male Voice Choir
Michelle played three pieces of music during our civil wedding ceremony.

The choice of music suited the event very well and Michelle's performance was outstanding, we would definitely recommend her for anything similar.
Thank you so much Avon and Somerset Constabulary Male Voice Choir and Michelle Krawiec for a really special evening of wonderful music at St Mary’s in Hemyock last night!
Blackdown Support Group